A Divine show from Jones the Voice 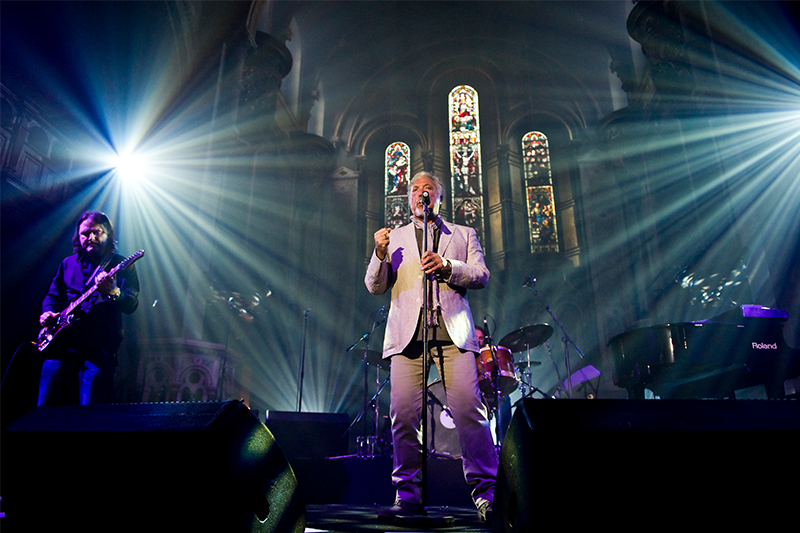 It’s probably the broadest audience of which I’ve been a member, in terms of ages and lifestyles, with the hardcore mumsy Jones fans down front – knickers tonight kept to themselves, this being a proper chapel and all – joined by the younger urban professionals who came on board through Tom’s revival during the last decade, and now an extra layer of musicologically intrigued observers like myself, who would never have dreamt of going to see Tom Jones in his showbiz pomp, but are fascinated by the recent raw exposure of his gospel and blues roots with the Praise & Blame album.

Just about the only subcultural group that isn’t represented here tonight are goths, which is ironic given that this may be the most gothic experience they might ever encounter – a man unearthing his soul in a church, bathed in a daring chiaroscuro composed of artful shafts of light and shadow. It’s a brilliantly lit performance that makes clever use of the Union Chapel’s features, with a row of tiny tea lights glimmering in sconces around the balcony, and the broad, bulbous space well fogged with dry-ice so that each song’s spectacular lighting choreography doesn’t just illuminate the singer, but animates the air itself, cutting the sepulchral atmosphere with seemingly solid beams that angels could dance along.

The show opens with the slow tattoo and desultory strum of Dylan’s “What Good Am I?”, the beat picked up by audience handclaps, swelling to cheers as the singer takes the stage, backlit in penumbral gloom in front of the pulpit. If anything, it’s a better delivery than that on the album, Jones negotiating the song’s unusual melodic shifts more smoothly as the ghostly hum of organ rises behind him. Then for the lolloping boogie “Lord Help” he’s caught in clear white spots against hellfire red, belting out the song with an easy power remarkable for a vocalist of his age, his body twitching lightly as the tempo picks up towards the end. With its astringent, snarling guitar riff and primitive pulse, it’s like The White Stripes or The Black Keys with a more commanding singer.

For the slower, hymn-like “Did Trouble Me”, the rear wall’s stained-glass rose window is dramatically lit up, a striking coup de théâtre that harks back to its original purpose. Harmonium wheezes through the opening section, before the tempo shifts up as banjo and tambourine bring a more revivalist tone. Then as the final chorus is reached, the stage is bathed in downward shafts of brilliant white light, as if God himself was smiling down on Tom. He – Tom, not God – takes a moment to explain the concept behind Praise & Blame being that if you’re willing to take the praise, you have to be prepared to take the blame sometimes, too. “Like people sometimes say, ‘Oh, Tommy’s got a lovely voice’,” he offers as an example, “‘…but isn’t he a naughty boy!’.” The light Welsh brogue, and the cheeky twinkle as he turns to take a sip of water, speak volumes about a career spent stroking audiences with his natural charm.

With his charisma and assurance, Tom Jones could lead a congregation of sinners easily to God – if he wasn’t such a naughty boy.